Not for the first time and not for the second, Access Bank once again proved to be a leader when it comes to realizing their corporate social responsibilities. Early this month, the bank put together its yearly marathon to keep Lagosians not only fit and healthy but to also reward excellence in outdoor sports.

Of course, long distance runners are by now used to the bank’s annual marathon race in the city by the lagoon. Expectedly, there was palpable expectation during this year’s competition. And so, when the race eventually kicked off on Saturday February 2, the number of participants huffing and puffing along the designated routes stretched for miles and miles.

The start-off point began at the National Stadium and it was to terminate at Eko Atlantic on Victoria Island. By six in the morning, invited guests had started showing up at the stadium. There was, for instance, Governor AkinwunmiAmbode of the state. There was a dozen or more bank execs and staff and hundreds of sportsmen and women, many of them in designer trainers, tracks and sports gears, ready to pound the pavement for hours to become the bank’s champion racer.

The winning prize of $50, 000 was enough incentive to keep competitors trudging on in the February heat. But before the race proper commenced, dance bands and musicians kept the temperature at the venue at a reasonably high level, zinging up the mood of the entire event.

Anyone familiar at all with long distance races know that our East African neighbours are ever at the top of their game. So, it was no surprise when the Ethiopian, SuntayahuLegesebreasted the tape way ahead of his co-runners. But the surprise of the day was a young Nigerian, Joseph David, who came not as a star athlete but left as a surprise discovery not on the track but as a singer.

Like other participants in the dance competition, David, an unemployed youth, had gone to the event out of boredom, angling to win the modest sum of N20, 000. But fate smiled on him in the person of D’Banj who fancied the young man’s musical talent.

While Koko master was on stage performing, David beckoned on him to be allowed to sing. Some thought he was meddlesome and so shouted him down. But David hollered the more, asking to be given a chance. In the end, he had his way. D’Banj gave him a chance. He took it and mesmerized both D’Banj, the audience and the host.

Impressed to no end, the Lagos state governor AkinwunmiAmbode made an instant donation of N2,500, 000, thus starting off a musical career of a young man that would have gone to his grave with him, as is often said that the best ideas are in the graveyard.

“It was the longest one minute of my life,” David later reflected. And presumably the most decisive one minute, too, because he came to the show hoping for a pittance but became a millionaire instead.

Predictably, emotions ran high, first of all, that of JD who, at one point, fainted straight away after his chance encounter with D’Banj and Governor Ambode.

Making a veiled allusion to what mother luck has done to JD, a staff of Lagos state rued that he has worked for 30 years with the state government but never had a chance to as much as “shake the governor’s hands.”

So, what did the audience take away from the Lagos marathon organized by Access Bank? First, the race itself was an enormous success, what with all the security measures and medical facilities deployed to make sure nothing went wrong.

But the highlight of the occasion, as it is now clear to all, was the discovery of a new musical talent in the person of JD. By the time the next marathon comes around next February, you can be sure that most youths would be present to take their chances or let mother luck smile of them as it has on JD. 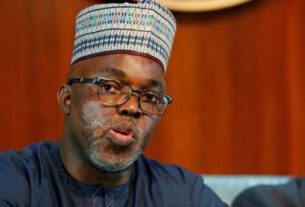 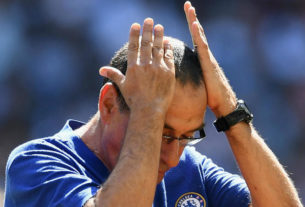 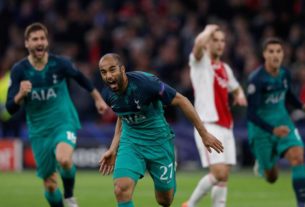