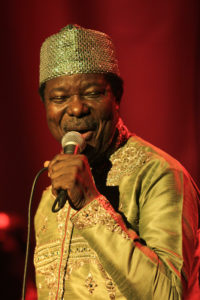 King of World Beats, Sunday Adegeye, roundly blessed and gifted, is of course endowed with extra strength and energy. Then, there is longevity too. All these qualities are very visible and stand him out.

That, too, is precisely why he has become a household name across the globe and remains a phenomenon till date. KSA, as he is better known, has just clocked 74 good years of age and still bounces in appearance and performances.

IT is not surprising, thus, that the world is still celebrating days after his circled day, September 22. And because he has touched an innumerable number of people with his special talent, music, he has also been the man of the moment.

Aside from being the centre of attraction on social media and the mainstream since that date, the entire electronic media did [and are still doing] special programmes on him with his hit tunes featured in the interlude.

Just like the music industry’s CMOs and other agencies are not left out. Similarly, KSA was the toast of veteran analysts and presenters who knew how and when his musical odyssey started. Just like his colleagues, both contemporary and new, were not left out of the shindig. In fact KSA was well celebrated outside at different for a by fans and close associates. And the parties are still going on.

In far away, London, UK, a popular joint owned by a Nigerian was said to have had a session dedicated to the legend featuring his popular tunes with a full house of different nationalities.

Although he has slowed down in terms of album releases, same cannot be said of his musical shows. He is still ‘’the band to beat’’ at any event for obvious reasons – his uniqueness and stage prowess.

What’s more, the celebration seems to be endless and posits one thing; KSA may have been talented from the onset, but his ability to develop the talent is another thing. This is where hard work and less procrastination come in life. He embraced hard work and the rest is now history.

Happy birthday once again King of World Beats and here is wishing you many more years of healthy life and triumphs.