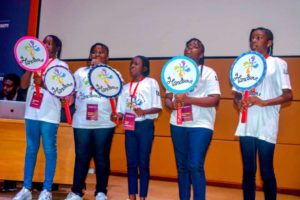 After a successful outing at the 2019 Technovation competition in far away Silicon Valley, California, United States of America, Brain Squad, the Nigerian representative at the tech challenge got a heroic reception as returned to Nigeria.

A group of five Nigerian girls, the team comprising Ariyo Ayomikun, Ivana Mordi, Jadesola Kassim, Munachiso Chigbo and Pandora Onyedire, all Grade Six students of Standard Bearers School Lagos, were the only African team to make it to the finals. They had cruised their way to the finals, after coming tops at the State, Regional, and National levels of the competition.

The girls invented an app that helps less privileged children go to school. The app, Handsout, won the People’s Choice award at this year’s global Technovation competition, which featured more than 19,000 teenage girls.Brain Squad were looking to follow in the footsteps of last year’s surprise winners, Team Save-a-Soul; another Nigerian side that saw off competition from teams from around the world on their way to claiming the gold in the global competition for young girls. Handsout allows people all over the world to easily donate to Nigerian children and their families to help them pay for school fees, stationaries, and medication. 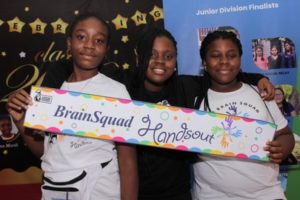 It was inspired by a tragic incident that occurred in Lagos early this year where many children lost their lives after a school building collapsed in Itafaji, Lagos Island. The girls developed the fundraising app to make it easy for people to make donations to help the needy pay for school fees, food, shoes, books, stationery, and medication and more. And their innovation had earned them a place in the finals of this year’s challenge.

Many had tipped them to pull off a Team Save-a-Soul by going all the way and the girls had every right to dream. But in the end, they could only manage to come away with the People’s Choice Award, having lost out to teams from India and Cambodia in the junior division. 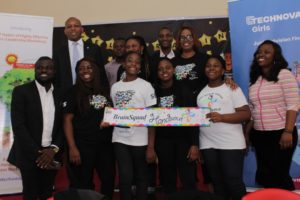 Many had tipped them to pull off a Team Save-a-Soul by going all the way and the girls had every right to dream. But in the end, they could only manage to come away with the People’s Choice Award, having lost out to teams from India and Cambodia in the junior division.

Speaking at a reception held in their honour in Lagos, Munachimso Chigbo said participating in the competition has widened their knowledge in the area of ICT.“It was an interesting experience for all of us; they also introduced Artificial Intelligence (AI) to us and how to use it to solve problems. We went to Uber where they explained to us the platforms they use in their operations, while Google took us to Google Ventures where we had our practice pitch. All the contestants, both senior and junior category, where to meet the judges; it was an opportunity for them to give us info about our pitch and what they feel we should add to it.”

She continued: “Technovation has opened this door for all of us. Personally, I wasn’t a computer person before now, but participating in this competition has shown me that I’m really into coding, which I want to use for my future career.” 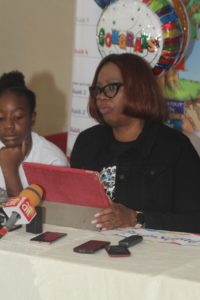 On her part, Ayomikun Ariyo, another member of the Brain Squad, described their participation in the global competition as a wonderful experience.
“I learnt a lot of things at Tecnovation; I’m really grateful for the platform it has given to all of us. We went to a lot of field trips and we also had fun; we went to Fisherman’s Wharf, where we ate; we took a tour of the city and saw so many things. I feel Tehcnovation has shown us that we are able to code; we didn’t know what we know now. I’m sure coding will impact our lives as we grow older and I say thank you to our mentors, our parents and everyone for the support they have given us,” she said.

Speaking at the event, the proprietor of Standard Bearers School, Mrs. Modupe Adeyinka-Oni said participating in the competition was an induction for the girls into the Technovation Academy.“They have over 17,000 of them right now around the world. This is a platform that allows them to reach out for mentorship anytime; it also allows them to write their CVs and put Technovation 2019 finalist on it. What that would do for them is to take their application from bottom to the top of the pile. In America, Technovation is a big deal. Around the world, it’s something people are just getting to know. Once you take part in the contest, you don’t even need to get to finals, it opens doors for you,” she said. 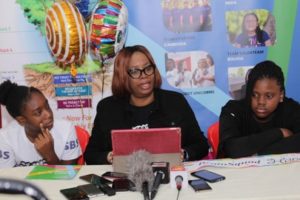 According to Oni, who was instrumental or rallying support for the Brain Squad to make the trip to United States, the curriculum of Technovation takes them from being able to find a solution and ideate all the way to solving the problem.

“One of the things that was demonstrated when we went to Uber in the AI project was that very quickly, my girls knew how to approach the problem; we never talked to them about AI. But immediately they told them that AI is used to solve problems and gave them 10 minutes overview, immediately they set them to work. I was a bit nervous, ‘will my girls know what to do?’ But I was very proud of them the way they took the challenge. I do know that they’ve been impacted in the ways that money couldn’t buy; staying in Nigeria could not have given them.”

The proprietor informed that the commitment right now is to bring what these girls received at Technovation back home. “Technovation will always be there and we will always participate, but not everybody will make to the United States. So, I’m asking corporate bodies to think what they can do; it doesn’t have to be Technovation girls. We have boys and girls in Nigeria that need to be empowered, that need to be shown a different way. Right now, we have a lot of children growing and waiting for mummy and daddy to continue to help them. But what Technovation shows you from a young age is that, from the age of 10 to 11, start giving solution to world problems.” 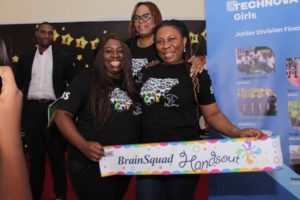 An app aimed at raising funds for school fees for the less privileged children in Nigeria, helping one child at a time.

They came up with an idea of building an app to raise money so they can help children who can’t afford fees go to school.

On the 25th of May 2019, the team and their app HANDSOUT, won the Lagos Regional Pitch in the junior category at the Lagos Business School. 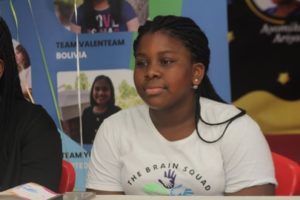 On the 25th of June 2019, they won a place as the finalist to represent Africa in the finals in Santa Clara, California.

On the 12th of August they were already in the US for the finals which spanned from 12th August-16th August 2019.

The Technovation team had different activities planned out for each day for the children from visiting Google Ventures, Tech World, Ubber office and Oracle. All these in a bid to drive home the fact about technology, encourage the girls to stay in technology inclined future career and how technology is changing the world.

The final was held at Oracle office in Santa Clara where the children had to pitch for their app and defend it.

They eventually won The Viewer’s Choice Award which was a great achievement for the girls.

It’s not about winning but the fact that they were there for the final (this was out of 7,000 entries, it came down to 2,000,  then it later drizzled down to only 12 teams) and they are all winners.

Technovation was actually looking out for apps that could solve an identified problem in our society and ours was self-sustaining. Their message to the girls was to go back home and build the app.

The judges, google ventures and oracle are all waiting for the app to be on playstore – so we are under pressure to launch the app and put it on playstore.

We are looking for people who will do it for free. 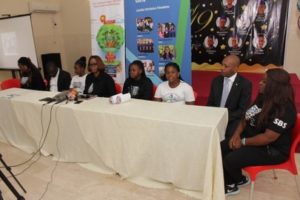 JOURNEY TO THE U.S.

The competition which kicked off on 23rd of April 2019 in all the countries around the world with 7,500 girl teams was whittled down through a zonal pitch, followed by online judging until the top 12 finalist emerged. This meant mathematically that 12 teams out of 7500 or 0.0016 percent of the competition made it to the finals

Technovation 2019 showcased ingenious apps like our Handsout app which were designed to offer tangible solutions to pressing problems within their communities. 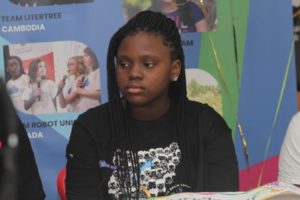 Team BRAINSQUAD girl’s saw the increasing number of homeless children begging and hawking on the streets around Lekki and decided that giving them food and other charitable efforts wasn’t enough. They felt that behind every peering peer of eyes lay children with exceptional gifts from God who were waiting for opportunities to present itself and their unique greatness revealed. Also adding to their sadness was the story of the building which collapsed at Itafaji where school children lost their lives. At our special assembly where prayers were offered for the safety of the children, we observed a lot of baffling looks as the school children couldn’t understand how children were in school in an unsafe building. They also heard of the story of 7 year old Success Adegor ( which went viral). Success was sent home from school because her fees weren’t paid. Her success story became the inspiration which gave birth to HANDSOUT.

An online app that allows all well-meaning citizens of Nigeria and the global community to support the payment of fees for indigent children. 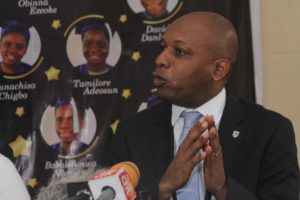 HANDSOUT is an online hub where donors and recipient organizations meet on a transparent and secure platform that allows donors to determine the extent of their contribution without pressure. Option are available and can be modified at anytime. Likewise recipients are introduced to HANDSOUT via the webpage after each recommending organization has been accredited through a verification process. Only accredited partner organizations can request for donations which will be paid directly to the child/ children schools. Subsequent payments will be made after a stern review of reports and other evidences of attendance/ progress have been duely uploaded to the website.

Our plan is to launch the website on the 1st of September to allow for credible organizations wishing to partner with us by recommending possible HANDSOUT beneficiaries from across the 6 geo political zones as well as Abuja. These Beneficiary partners will be expected to take up full monitoring responsibilities on behalf of HANDSOUT. Failure to meet report deadlines or submit substantial 3rd party evidence of participation will cause a child to forfeit their scholarship.

Close monitoring of these Beneficiary Partners will be handled by Hands out administrative staff. 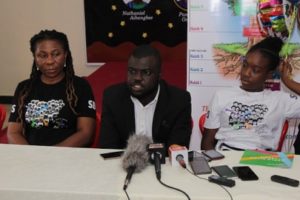 Brainsquad is happy to partner with;

We look forward to partnering with other NGO’s and Foundations who have evidence based performance working to ensure indigent primary school children get an education in state provided private schools across 36 states and the FCT.

To register with Brainsquad, kindly submit the following on our website to allow adequate time for proper verification.

Watch out Nigerians…..10.5million children out there need our help. We can’t do it without you, together we will achieve much.

Little drops of water will one day fill our bucket. 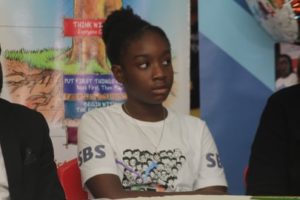 Our gratitude goes out to all Nigerians at home and abroad for their overwhelming support of Team Brainsquad and their HANDSOUT App.

We’re also celebrating the following organizations who made it possible for us to accompany the team to Silicon Valley;

Restral Consulting and The Leader in Me Leadership Programme 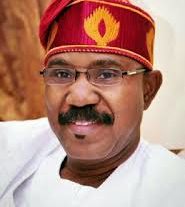 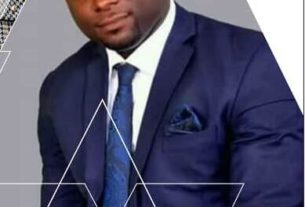 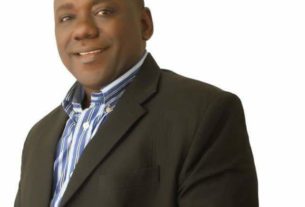