A Brexit agreement could be reached within days, the EU’s chief negotiator, Michel Barnier, has said, but only if the UK can table new proposals by midnight tonight.

In a meeting of the 27 EU member states this morning, Michel Barnier is thought to have said the latest British proposals on a departure deal were not yet good enough, Yahoo News UK has reported.

Specifically, a “big gap” remains over the issue of customs arrangements between Northern Ireland and the Republic of Ireland.

Mr Barnier warned he needs Boris Johnson’s good intentions to turn into a legal document as the Prime Minister races against the clock to secure a fresh agreement before the EU summit, which starts in Brussels on Thursday.

Speaking before arriving at a meeting of EU27 ministers in Luxembourg on Tuesday morning, Mr Barnier said work to secure a deal has been “intense”.

Bloomberg reported that Mr Barnier told ministers during the meeting: “Not all that UK has been saying in the last days is totally unacceptable.

“They have moved in our direction on key points and that’s why I think we still can make significant progress today.”

Irish deputy premier Simon Coveney raised some hopes by saying “a deal is possible”, maybe even this week, but stressed: “We’re not there yet”.

He said there had been “slow progress” and that “a big step forward needs to happen today”. 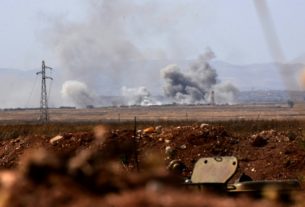